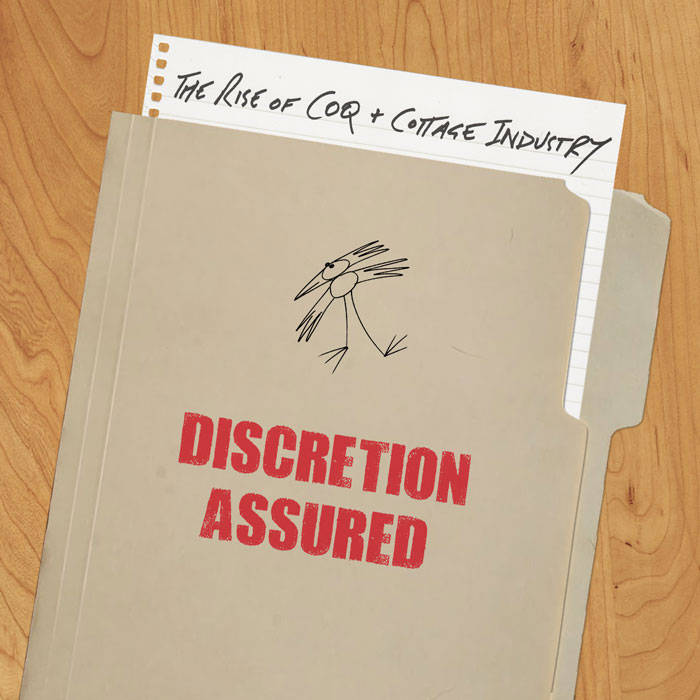 "Discretion Assured" – apt title. A theoretical record company. Some invisible releases. One thing any signing could count on was lack of exposure.

Formed in the Adelaide Hills South Australia in 2002 by novice producer Ben W, Cottage Industry Recordings lasted a scant four years, until nominal star W. COQ disappeared at Deddick in Snowy River country in 2006 and the company folded, taking with it a reputed hundred-song archive of unfinished releases, most of them COQ's.

Never a comfortable relationship, the collaboration between COQ and W was all-important. It was COQ who served as unofficial A&R man, introducing the reclusive W to everyone from cheese-rock-party-metal guru Reed "Bleed" Cathcart to scuzz/country rocker Jim (Glenorchy) Dandy, not to mention their sidemen, who'd serve as revolving house-band on subsequent releases.

But if there was magic in this mixture there was also madness. By mid-2005, by W's estimate, there were five COQ-related collaborative projects awaiting release, all incomplete, while COQ's debut solo album "Tightrope Walker" had remained untouched since 2003. Meanwhile COQ was still bitching about the "limited release" (read a few copies for the band) of psychedelic party-band the Chicken Dinners Project’s live-to-eight-track "04/04", despite that the CDP had featured extensively on the earlier "66 Sessions" and demand for a sequel to the seven-minute "Chicken Dinner: The Genesis" can hardly have been extreme. In the end something had to give, and though W compromised with another limited release (the Chautauqua's "3-Phase") for COQ it was too-little too-late.

At the time of writing, CIR is a labyrinth of incomplete recordings by various feuding artists, which, since COQ's disappearance, looks like never being completed. If the current compilation barely scrapes the surface, it does attest to certain verifiable facts: in one form or another, in runs of five to fifty, there were twelve releases in the years 2003-6. With the exception of the first (CIR01: "Twins Teaser", a pre-release sampler of the music/spoken word project "Brothers of the Head", which emerged on the affiliated Cottage Industry Press), each of those releases is represented here, though remixed and edited to new streamlined effect, which purists may find not quite in keeping with the label’s former ethos. W, as always, is unapologetic.

Though partly a homage to his fallen comrade (COQ appears on at least half of these tracks), "Discretion Assured" is, like all the label’s releases, a reflection of W’s tastes. Where COQ preferred his more cerebral work, W casts him variously as positive-affirmation guru ("World is Yours"), sex-mad Neanderthal ("Gauntlet") and hopped-up punk ("Johnny!", a paean to former Australian Prime Minister John Howard). In contrast, W's own presence is shadowy: the archly-impersonal "3x5=15", and "Waitin' in Character", taken from the early W/COQ collaboration "COQ Solo", the exact authorship of which remains disputed.

Meantime Reed Bleed (AKA Sniffy C) plays drums on half the tracks, bass on a few more and a bit of everything on his own "Snowblind & Snowed Under". (Re-edited, its message is still more obscure: "Do you know what I mean? I don’t suppose you do," intones the Cheese in this most baffling of substance-abuse songs.)

Third key-player Dandy belts out the garage-funk self-tribute "D.A.N.D.Y", hypnotises the Southern Baptist Rebellion into subdued late-night mode as Rebellion Off-Duty and sets out with the Chautauqua on a travelling educational show, winding up at Lake Chautauqua, New York State.

Other players? The usual suspects: A. Snowball, DLW (AKA Cobalt Meatus), both CDP mainstays, both demented as usual. Also the reclusive Menu, who never quite gelled with the crew. And last but not least, Paddy Ryan of Greater Northern, guitarist/bassist/sound engineer, who mastered these lo-fi artefacts into something resembling aural warmth.

And me? In September 2001 I stumbled into a COQ Bros gig at the Planet Cafe on Brunswick Street Melbourne and never looked back. At first a fan of W’s, whose introversion I understood, I soon saw that COQ was the true luminary, and briefly became his manager in late 2005, clashing often with W over a "business model" I found increasingly bizarre. Now, twelve years later, I’m nostalgic for W's vision.

True, there are glitches, sonic scars, missed opportunities. But having visited a few of W's various "studios" (Studio 66 Bridgewater SA, Hank's Folly Wapengo NSW, the Ben W Clinic Toolangi Vic), I'm only too familiar with their inadequacies. Borrowed amplifiers, battered drumkits, hastily-annexed corners of rented houses where W would set up the meager tools of his trade: portable Tascam eight-track recorder, cheap Rode condensor microphone, seventies hi-fi speakers and a rotating cast of instruments which, while they improved steadily, could hardly have gotten worse. Added to this, a cast of collaborators who approached each session not as a professional engagement but as a celebration...

"Celebration," I hear you say? Isn't that what's missing in so much of the music of today? Sit back and let COQ and his crew take you to a place where no-one gives a f**k, for real. The truth is, if I could, I'd be there with them today.

All tracks produced by Ben W

except "Johnny!" by Matt & Chris at Melbourne SAE
mixed by J.T. & Paddy at Rorschach

Bandcamp Daily  your guide to the world of Bandcamp